Minnesota Today from MPR News brings you the most important stories from around the state, on your schedule. Stay updated on the COVID-19 pandemic and its impact on our state and communities in just 10 minutes every weekday.

We’d love to hear from you about what you think of the show. Please complete our survey here.

By Kirsti Marohn
Both the state and the defense rested their cases on Thursday, the latter without testimony from former Minneapolis police officer Derek Chauvin, who has been charged with murder and manslaughter in the killing of George Floyd. This afternoon MPR News update for Thursday, April 15, 2021, was hosted by Kirsti Marohn. Theme music by Gary Meister.

Protests continued for a fourth day after a Brooklyn Center police officer shot and killed Daunte Wright. Another large crowd gathered Wednesday after the former officer was charged with second-degree manslaughter. Kim Potter is expected to make her first appearance Thursday. Minnesota Bureau of Criminal Apprehension agents arrested Potter and booked her into Hennepin County Jail Wednesday. She resigned from the department Tuesday. This is an MPR News morning update for Thursday, April 15, 2021. Hosted by Cathy Wurzer. Our theme music is by Gary Meister.

Brooklyn Center Mayor Mike Elliott on Tuesday called for Minnesota Attorney General Keith Ellison to handle the case of Daunte Wright, the 20-year-old who was killed Sunday by a Brooklyn Center police officer during a traffic stop. Elliott also said that Kim Potter, the officer who shot Wright, has resigned, as has Tim Gannon, who was the city’s police chief. This is an MPR News morning update for Wednesday, April 14, 2021. Hosted by Cathy Wurzer. Our theme music is by Gary Meister.

By John Enger
Brooklyn Center Mayor Mike Elliott Tuesday called for Minnesota Attorney General Keith Ellison to determine if Officer Kim Potter should be charged in the death of Wright. The 20-year-old Black man was shot to death by the Brooklyn Center police officer during a traffic stop Sunday. This is the afternoon MPR News update for Tuesday, April 13, 2021, was hosted by John Enger. Theme music by Gary Meister.

A 2nd night of protests in Brooklyn Center; officer who killed Daunte Wright is ID'd

Police clashed with a large crowd Monday who gathered for a second night to protest the killing of 20-year-old Daunte Wright during a traffic stop. The Brooklyn Center police chief said earlier in the day that officer Kim Potter had intended to stun the man with her Taser gun but accidentally drew her handgun instead and fired once. This is an MPR News morning update for Tuesday, April 13, 2021. Hosted by Cathy Wurzer. Our theme music is by Gary Meister.

By Dan Kraker
Gov. Tim Walz on Monday ordered a four-county curfew overnight into Tuesday to help keep the peace as the Twin Cities reeled over news of another fatal encounter with police, this time in the Minneapolis suburb of Brooklyn Center. This edition of Minnesota Today for Monday, April 12, 2021, was hosted by Dan Kraker. Theme music by Gary Meister. 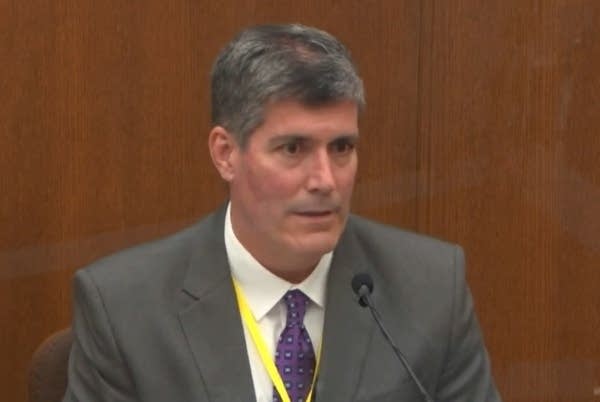 Week 5 of the Chauvin trial: A special edition of Minnesota Today

The medical examiner who ruled George Floyd’s death a homicide said heart disease combined with being restrained by Derek Chauvin and two other officers led to the man’s death. Other medical experts described Floyd’s being squeezed between Chauvin’s knee, the other officers on his back and legs and the pavement. Meanwhile, Minneapolis police leaders testified that Chauvin’s use of force did not follow his training. This is a special edition of Minnesota Today for Saturday, April 10, 2021. Hosted by Nina Moini. Theme music by Gary Meister.

Long-awaited testimony from the Hennepin County Medical Examiner in the trial of Derek Chauvin is focused on how George Floyd died. On the stand Friday, Dr. Andrew Baker said, with the autopsy, he determined the force applied to Floyd was too great for him to bear, given his heart disease.  This is the MPR News afternoon update for Friday, April 9, 2021. Hosted by Perry Finelli. Theme music by Gary Meister.
Providing Support for MPR.
Learn More
Program ScheduleStation Directory
Providing Support for MPR.
Learn More